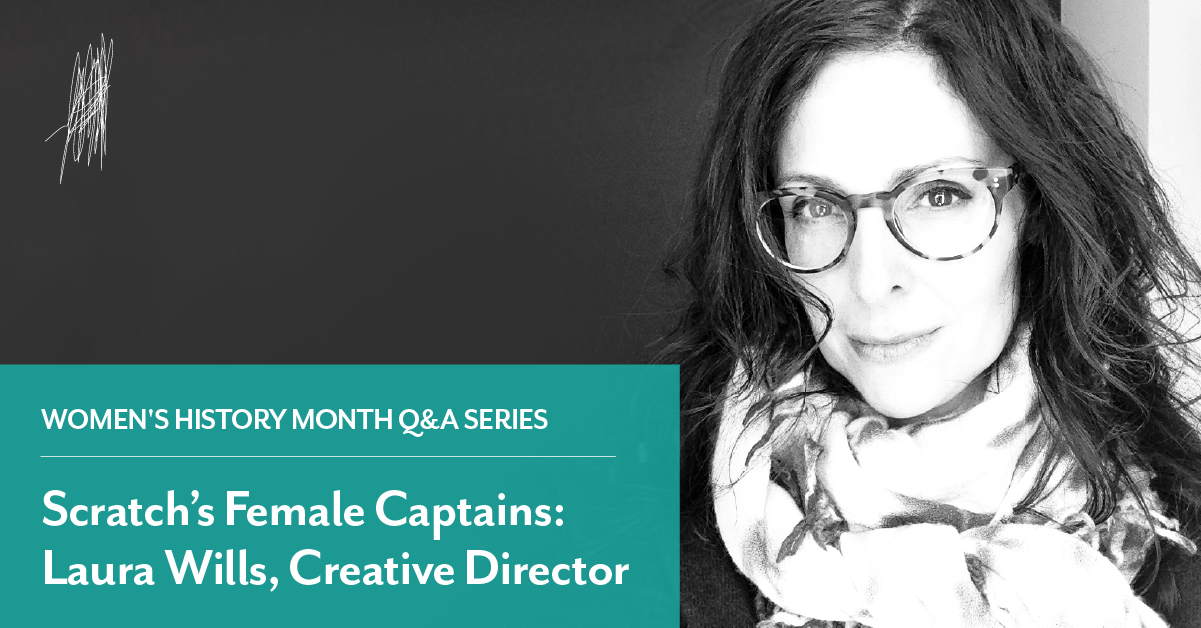 Our female captains at Scratch continuously influence, motivate, and empower us to be the best we can be. So, it’s only fitting to celebrate them throughout Women’s History Month!

Next up in our Q&A series, we sat down for a conversation with one of our top creative minds. Scratch’s Creative Director Laura Wills is a valuable player in leading the creative team to accomplish their goals and helping clients bring their visions to life. Lo’s story is inspiring — as one of the first branding designers in Canada to foray into the interactive world, she went on to lead interactive design groups at several branding agencies and start-ups, and her work has been awarded and recognized internationally. She has a long list of women who inspired her along the way.

Q: What sparked your interest to work in the tech industry?

A: True Story: I give full credit to Kate Spade, the handbag designer. Back in 1995, shortly after the agency I was working in got our first access to email and an internet connection, I was reading a creative industry magazine and found out that Kate Spade had just launched a groundbreaking new website. At a screen resolution of 640×480, it was one of the first websites that had PICTURES and any kind of design sensibility. I waited till my boss got into the office and then showed him the page and asked, “Can we do this?”

At the time, there was literally NO training for interactive design — we were all self-taught. My boss let me hire an HTML coder to share my desk, and she sat side-by-side with me while we figured things out. I got to ask all the questions I was dying to know: ”Can we do THIS?” “How do we do THAT?” Six months later, they put me at the helm of the first-ever interactive design group in our branding agency and we were off to the races.

Interestingly, the first 2 coders I ever worked with were both women — to this day I don’t think I’ve seen such elegant code as the stuff Irena was writing — she helped me understand and read the language, and that has been a godsend for me all these years, particularly in the early days… I often worked with male developers who had not necessarily worked with a creative person before, and they often seemed surprised (and maybe a little annoyed) that I, a woman designer, could speak their language. It was super empowering for me, because I could quickly turn a condescending conversation into one of respect and mutual understanding. And good work.

Q: Why are women underrepresented in tech?

A: I think it’s partly generational… where we are at this point in time both in the sphere of women at work and in the age of technology. We’re only, what… 30 years or so into the internet age? For sure it was completely male-dominated for a long time, but I see that changing rapidly. I don’t know that my nieces, who are 11 and 9 at the moment, will feel the same limitations in the future. They are unstoppable, and the world is changing constantly. I definitely wish to see more women in Founder or CEO positions though, whose ideas and work have equal access to investment and attention.

Q: What women in history have inspired you?

A: Carmen Herrera is always the first woman that comes to mind for me. While not from the tech world, she did come from an entirely male-dominated field: ART. She was a colleague and contemporary with the great, influential Modernist painters of the 20th century, completely overlooked until she was “discovered” in her 80s. And then it was entirely clear how much of the trailblazing had been inspired by HER. But for her all that time, it had been about the work, and the exploration, and the camaraderie… not the fame and the recognition. Partly because they rarely allowed it or prioritized it at the time, but even so she continued on steadily, painting every day, evolving constantly, producing a mind-boggling body of work for which she was FINALLY recognized, and then collectors and galleries clamored for her work. There’s a great documentary about her, called “The 100 Years Show.” I was so inspired after I watched it the first time, that even though it was midnight or something, I had to put on my running shoes and go rip around my block, I was so excited and felt so triumphant.

A: I actually never think of my work as being criticized — rather, I always think of it as dialogue. Where is it working, or not quite, and what can we push further to make sure it’s telling the right story in a compelling way? I have certainly encountered men in my field who deal very defensively with criticism, but I don’t think it’s limited to men, to be honest. I think PEOPLE who are good listeners, good collaborators, and mature enough in their understanding of their craft, are there to find solutions. And those are the people I want to work with.