At Scratch, we’ve decided to revive our Meet the Team blog series to showcase our dynamic culture and highlight the incredible things our team members do, both inside and outside the office.

To kick off this new series, we sat down with Matt Grant, our Vice President of Content. From a start in academia to his current position directing all things content at our Boston-based agency, “MTG” as we call him has an interesting story to tell. 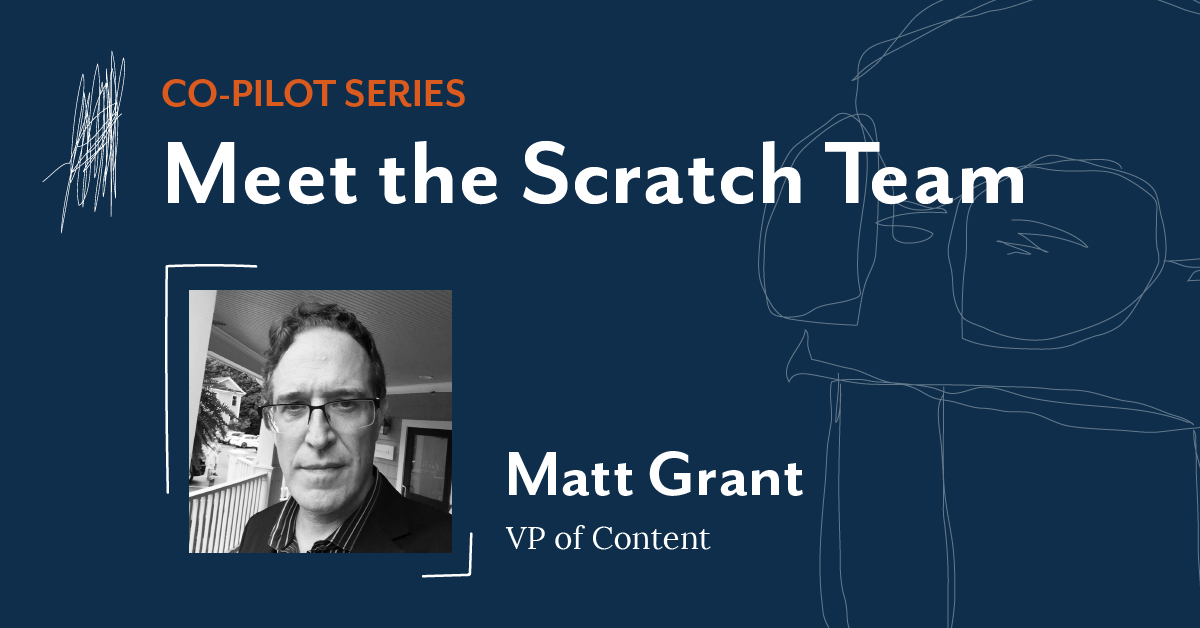 I didn’t start my career path doing content at all. I got my PhD in German Studies, but was having a hard time landing a job as a professor. I eventually got sick of it and met these people who ran a large staffing company. They described all the different departments of the company and asked what I wanted to do. I ended up building their training department. I got to pick my own title, so naturally, I went with “Minister of Enlightenment.” I even made it into Fast Company’s “Job Titles of the Future” column.

I ran training there for a while before becoming the company spokesperson. Eventually, I moved into marketing, launched their blog, ran an email newsletter, began experimenting with podcasting and video. We didn’t call it “content” or “content marketing” back then. It was just marketing. Then, about 10 years ago, my friends Ann Handley and CC Chapman wrote a book called Content Rules. It was one of the first books that explicitly talked about content. That’s when it started to become a thing.

When the financial crisis of 2009 hit, I was laid off along with 8.8 million of my closest friends. I asked myself, “What am I good at?” I knew I could take information, synthesize it, and communicate it effectively to others. And all of a sudden, companies had an increasing need for social media and digital content. In other words, I discovered that companies would pay me to do something I enjoyed doing and that, as it turned out, I was good at. Eleven years later, I’m still doing it!

What is your favorite part about working in content? What would you like to do differently while working in this space?

As for your first question, and this will sound totally narcissistic, talking to smart people and having them think I’m smart is probably the part I like the best about it. Of course, they don’t always say, “Damn. You’re smart!” Instead they say, “This really reads well” or “That’s a great way of putting it” or just “You totally get it.” In any case, it makes my day!

Something I’ve been trying to do differently with content while working at Scratch stems from the feeling that we’re not being daring enough with our writing. We write things that are clearly written and on message, etc., but are also “safe” in a sense.

I keep thinking about ways to elevate what we’re doing so that it stands out. No one ever says to a friend, “I read this great ebook on product lifecycle management. I know that you probably don’t even know what that is, but you have to read this. It’s great!”

I would like us to produce work that gets that response!

What have you learned working at Scratch?

It’s very easy in this business to be an “order taker.” Sometimes the client says, “I want this,” and you don’t stop to question it—you just agree. But something Lora Kratchounova does, which I think is great, is respond by asking, “What if we did this instead?” We need to be advisors, counselors. If we just do as we’re told, what value are we actually bringing to the table?

Along with that, I’m trying to be sure I understand the client’s strategic agenda. Why does the client want to put out this whitepaper? How is it going to be used? What’s the point of it? There are so many different goals and agendas for everything we produce for clients—demand gen, brand awareness, positioning, impressing the investors or the board. Of course, sometimes clients are trying to do it all at once. I’ve learned how important it is to understand the agenda, whatever it might be, in order to create what’s going to best help the client do their thing.

What is the most important thing to you when it comes to working with clients?

I touched on this a bit just now. The most important thing is deeply understanding what clients are trying to do, on every level, and then demonstrating not only that you get it, but that you have ideas about how to get there.

Of course, this is part of the bigger goal of cultivating a sense of trust with clients. And you establish trust by being open and honest with them, especially when that means pushing back on some of their assumptions. Anyone working in a company, if they are totally committed and believe what they are doing, can kind of fall in love with their product. As an agency, we need to share that love, I mean, really believe in the project the way they do, but we also have to represent the outside. Which sometimes means letting them know that, to get across to potential customers, they may have to reframe how they view and talk about their own product.

To do marketing today, you need content. It’s just part of what everyone has to do. And it’s hard to create well-written content. A company shouldn’t be creating its own content or thought leadership because they’re going to end up talking too much about themselves and explaining things from their point of view.

If someone senses that what they’re reading is marketing-oriented, rather than just informational, they automatically start doubting it. We owe it to our clients to actually represent the outside, as I said. We need to push the audience perspective, because we’re technically outsiders as well.

What is your favorite part about working at Scratch?

It sounds so cliche to say it, but I love the people. The Scratch team are smart and creative and fun to hang out with. At the same time, we are fortunate enough to work with smart and interesting clients that are often at the leading—even bleeding—edge of their industries. It’s great to get to know them and have the chance to collaborate on bringing real innovation to market.

When you’re not at Scratch, what are you doing?

I love to play guitar and write songs. I’ve written a bunch of songs during the quarantine period that I’ve been really happy with. Aside from that, I like to be out in nature. I love trees. I also actually like hanging out with my family!

If you were able to give one piece of advice to your younger professional self, what would it be?

At 22, I graduated college, worked for a year, then went to grad school. If I had to give that guy advice, I don’t know what I would tell him. In a weird way, he was doing exactly what he wanted to do. He was trying to become a professor, but I might have asked him, “Have you thought for one second about what it actually takes to become a professor—the choices and the sacrifices that entails—and are you willing to do those things?” Turns out, he wasn’t.

The other thing I would have told the younger me is, “It’s kind of okay to not know where you’re headed.” I see it in my sons. They are trying to figure out what they want to be. I think that’s cool, and we all do it, but I’ve found that life can happen in interesting and unforeseen ways.

In other words, it’s good to have a goal, but it’s also ok if you don’t achieve that goal and if life does happen according to plan. In fact, it can mean living a life that you never even imagined was possible.