As some of you may know I’m a little crazy about punctuation and grammar. Before becoming a marketer, I was a book editor for close to a decade. It’s a thing with me. I get that most people did not enjoy diagramming sentences as much as I did and don’t get a real sense of enjoyment from a well constructed piece of content. But hear me out.

Grammar and punctuation are important. Errors with both can potentially change the meaning of your intended message. It can send sticklers like me in a twitchy fit. It can also make your reader lose interest or faith in what you’re trying to say. 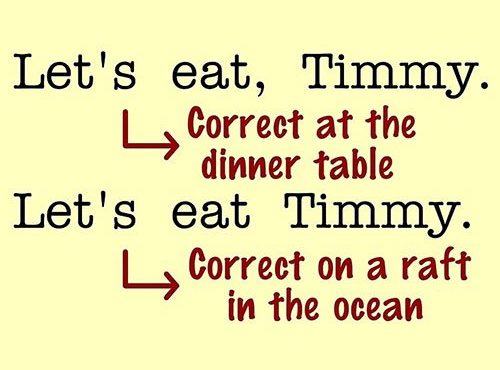 In marketing, where communicating is so much a part of our job, saying exactly what you mean to say is paramount. That means we should all be able to use language correctly. And when in doubt—phone a friend!

As many at Scratch can attest, this stuff drives me bonkers. And one day (one day!) maybe people will remember some of the rules.

Here’s a round-up of the most common errors I encounter and correct (and the reasons why). Please share any I may have missed in the comments!

Not all dashes are created equal

True story. There’s an em-dash, an en-dash and a regular dash. And they all have different, particular uses. Really. Look it up.

Dashes are not colons

I see a lot of people using them in slide titles (dashes where colons should be used).

If it needs to be explained, you may need to take a refresher course.

Book titles are italicized, articles have quote marks around them

Article: “Use Your Social Network as a Tool for Social Justice” by Raina Brands and Aneeta Rattan

Verbs should always be capitalized in a title. Is, Are, Be are a few that come to mind.

I love them. But others do not. Turns out, it’s a personal preference insofar as not using the oxford comma doesn’t confuse the reader. But you have to stick to one style for either to be correct. (And sometimes the semicolon is the way to go.)

I see a lot of folks automatically throwing in a comma before the word “and” or “or.” Turns out, that should only be done if what comes after the comma can be a full sentence on its own. Combining two full sentences with a comma and an “and” is called a compound sentence. And this is a very simplified explanation. There’s more nuance that I won’t get into here.

There, their, and they’re

Double negative. And while it is technically a word, it’s almost like you’re cancelling out the meaning of regardless.

A couple actually means two. So if you’re going to give “a couple” of examples, you can’t list more than two. If there’s more than two, you can use “several,” “many,” “some,” or just list the number.

When you’re listing words or phrases that are enclosed by quotation marks, the comma should be inside the closing quotation mark. (See above.) This is a US rule. The British do it differently (or at least they used to).

Think of which as another parenthesis. Your sentence would stand on its own without the information following the which. That, however, will have words following it that are necessary to the sentence.

In which vs. where

Use “in which” rather than “where” unless you’re describing a physical location: “This is one of those situations in which the only solution is to stop and start over.”

Ampersands aren’t meant to be used in place of “and”

Avoid using an ampersand unless it’s part of a formal name or used to save space in a heading or label. Otherwise, go with plain old “and.”

I was tempted to get into the rules for lists and hyphenated compound words, but I’ll save those for another day.